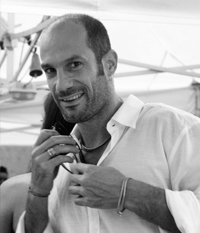 Brando Cimarosti has been with us since 2011. The professional photographer prefers to work with ambient light and takes care of the details. Get to know him and his “minimal” stories.

Brando is an experienced and professional photographer. He knows the interior scene very well and is constantly in action looking for the next location. Famous designers and artists open their doors to Brando with pleasure and let him capture the soul of their homes.

After graduating from school, he first worked as an assistant in some studios in Milan. Then he specialized at the European Institute of Design. Now photography is his sole profession.

Brando thinks that he doesn’t have a particular specialty. Working with ambient light and planning the details is just part of his style. He prefers the “minimal” stories in the sense that he photographs small houses instead of great magnificent villas. He prefers small environments, especially when they are furnished with taste and personality. In recent years he has also been spending more time on the portraits of the people who live in the homes.

"Each service is planned in as much detail as possible."

Brando begins working several weeks in advance. Everything is planned in as much detail as possible. When shooting Brando usually works alone, but on occasion he brings an assistant. In some case he opts to work at night, if the location merits it. His portfolio is a mix of editorial work, projects with institutions, and book projects.

The photographer understands the importance of social media and online media. He is active on social media, especially on Instagram. That particular platform has an important meaning for him as a photographer.Therefore he also has his own website.

Of course he looks for inspiration in interior design and architecture magazines, as well as consulting several blogs of designers. Generally, he thinks that it is important to have a very broad base of visual culture: from cinema to photography, from painting to sculpture. The aesthetic sense is nurtured this way.